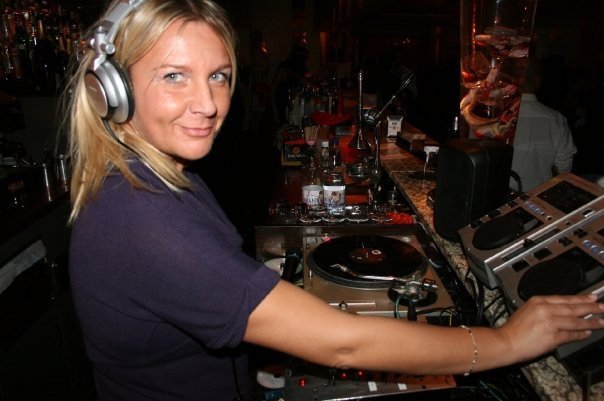 “Discipline is the first basic rule to undertake a journey; for a goal, a dream, to be realised. Then dare … have patience … and above all – know how to listen to others. The passion for music and the sensitivity did the rest.”

This is the answer given by Paola Peroni to those who ask “What are the tricks of the trade?”.

Paola was born in Brescia and from a young age showed passion and a talent for music. At 14 she studied piano and later studied music history through a course organised by Associazione Italiana Disc Jockey.

In 1991 Claudio Tozzo and Graziano Fanelli heard and invited Paola to join the Genux staff. Paola became a resident DJ under her first pseudonym: “DJ Groovy”.

She followed her passion for music in new directions and her professional career turned to new major productions such as Dj Groovy “Shake It”, “Confusione”, various remixes with the same pseudonym, “Step on” by Space Master (no. 1 France); “World of Confusion” by Space Masters (no. 1 in France); “Every Day of my Life” by House Traffic; “Bang” by The Riders (no. 1 in the Netherlands), “Coming” by Scwarzkopf and many others. The results spoke for themselves with popular hits in France, Germany and Holland.

In 1995 she started producing as Miss Groovy and to play in big ID & T Events such as Thunderdome and big clubs such as Cocorico in Italy. In 1998 the huge Bacon Popper phenomenon arrived thanks to an inspired idea by Paola: the result was the unforgettable “Free”, which in France alone sold 120,000 copies. Shortly thereafter she found herself opening concerts during Zucchero’s tour with her live set. Paola says: “An indescribable emotion, unique! Living in a large tribe where everyone has their own tasks and duties, all organised with professionalism.”

2002 was the year of production of “Acelerando” with Ramirez, a success which made the charts in Germany and England. With the Media Records team in 2003 Paola Peroni recorded “Trip on the Moon” on the label BXR and, in the UK Nukleuz; “Harem” and Kiper “The Land of Freedom”.

2004 sees Paola take on “Angel” by Cappella, which she wrote with GFB: the “Angel’s Anthem Mix” is, for her, a veritable tribute to the angels.

Also in 2004 she worked on “Il Cammino” with Gigi D’Agostino and the song “The Power of Love” was released on the Noisemaker Label, then in 2005 “Everybody’s Changing”.

October 2008 saw a new production “Thinking of You” and Paola played in Dortmund for the TOP DJ Meeting. Paola Peroni [as Bacon Popper] played for Datura’s show “Pezzi da 90” (“pieces of 90”) and for the occasion remixed “Will Be One” (Paola Peroni New Vision Remix).

In 2009 Paola was in Miami at the Winter Music Conference as New Talent DJ and also played at Hed Kandy Club lounge, Paola also played her remixes of Funkerman – “Slide”; The Rudenko Project “Destination” and Dr. Kucho “Just Be Good to Me” and the single “Me Exita” (in the studio with DJ Molella) was released.

In March 2011 Paola Peroni worked with Alberto Remondini in his studio on a project that used the riff of a 1990s song resulting in: Remondini & Peroni “We Need Freedom”.

2012 saw the birth of the Paola’s new label: Intercool Digital – melodic projects by Paola and the producer team who collaborate to create exciting and thrilling music.

Paola Peroni created the course Essere o Diventare DJ (“To be or become a DJ”) with the intention to search for new talented artists and DJs and teach them the theories and practices to make music professionally and spread positive techniques in a healthy way.

Paola is part of the Donne Impresa Confartigianato Brescia which often contributes to the organisation of events and musical entertainment. Since July 18, 2012 Paola is the Regional President (Lombardia) for the category “Music and Arts Cronfartigianato”.

February 2012: Corriere della Sera published an article about the new song Paola created featuring Diana “Too Much Love” on the digital release date: Valentine’s day. The project also now comes with remixes from various artists who collaborate with the label.

In June 2012 Paola collaborated on the cover of a track by The Killers: “Star – Human” which was released in Germany, Austria, Switzerland and Spain. In September 2012 Paola remixed the new song Dr. Alban – Loverboy (Paola Peroni Remix) on the Zyx Music label, and worked on the production of Eugenio Amato’s “I Feel Love”.

In the summer of 2013 Peroni Paola wrote and produced 49ers featuring Cheryl Porter – “Shine on in Love”.

In May 2014 the project Essere o Diventare DJ evolves with the support of the Confartigianato Patronage Imprese Unione di Brescia and UPA services. Paola Peroni and Graziano Fanelli (of Radio Studiopiù) are the primary teachers.

In June 2014 Paola Peroni created the song Abalasa for the TV showgirl Carolina Marconi and also remixed the cover of “I love Rock ‘n’ Roll” sung by Nina Moric.

November 2014 saw the start of the new radio show Essere o Diventare DJ dedicated to new talents who can demonstrate their abilities. Once a month the program hosts a guest-star at the console. The format is on air on various Italian and foreign radio stations.

In 2015 Radio Paola collaborated with Italian Makers Village, the outside EXPO for Confartigianato Imprese.

Then, in 2016, came “Rugby Calvisano – TRY Volume 1” selected and mixed by Paola Peroni, a CD that includes various dance music songs, a project that connects sport and music act to promote both the sport of rugby and the team Rugby Calvisano.

Hits (songs topped the world music charts) some of which have been chosen by players and other licensed use of the label TOP Italian and International: Sony Music, Ultra Records, Time Records, Spinning Records, Armada Music, Saifam Music Group, Ego Music, Energy records, and others.

Then, in April 2016 Paola Peroni featuring Cheryl Porter – “We can Fly” was the next release of label Intercool Digital. The song gets positive feedback from radio stations and by insiders; features in the programming of various Italian and foreign networks and in rotation on Radio Studiopiù – the Dance Station.

In June 2016 “Una Donne Per DJ” (One Woman for DJ), started, it’s the first contest show dedicated to women DJs and vocalists. The show is presented by Valerio Merola and saw DJ coach Paola Peroni helping to seek out talent to be included in collaboration with Radio Studiopiù. October 2016 saw Paola Peroni play her live DJ Set at the major Amsterdam Dance Event “Real House Party”.

Paola has a busy calendar of events – and so the story continues to evolve..